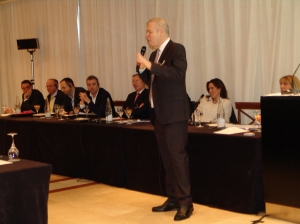 “Fractional” and “Fractional Ownership” are not legal concepts or homogeneous “products”; these are merely commercial names for “products” which have very different structures depending, basically, on the imagination and the intention of the promoter who designs them on the basis of the target client and the country whose legislation it will be subject to.

In any case, however, there are certain common characteristics to all of them, such as relating to a “tourist” activity which is carried out in a tourist resort – or, at least, a resort in which tourist or similar services are provided – and which requires a type of accommodation unit with certain characteristics that should make it attractive for clients who will value comfort and a higher level of services as it will be used for a longer period than the traditional one-week period.

Given the said characteristics, I consider that the objective scope of this product is that of a timeshare product – even if we would rather not call it that – as defined in Directive 2008/122/EC whose article 1.a defines a ‘timeshare contract’ as “a contract of a duration of more than one year under which a consumer, for consideration, acquires the right to use one or more overnight accommodation units for more than one period of occupation”.

And if these products are included in the legal definition of timeshare then they must be marketed in accordance with the rules of the said Directive as implemented in the respective national legislations. Its marketing is therefore subject to the said rules where these systems are governed by the law of an EU country, the product is targeted at EU clients or it is marketed in an EU country. I will therefore confine myself to the  marketing of “fractionals” and “fractional ownership” in resorts located in Spain as reflected in the title.

The legal regulations applicable to the marketing of these products in Spain are mainly those of the new Act 4/2012 of the 6th July, which was enacted by mandate of Directive 200/122/EC. However, where the products are not only marketed in Spain but they also relate to accommodation units located in Spain, the applicable regulations include the specific legislation governing tourist resorts in the Spanish region where they are located.

This article being conditioned by the limited space (lawyers always find it limited) which this publication has kindly offered me, I should refer only to the two best-known varieties of fractional products, i.e. use or occupation of the tourist accommodation unit (apartment, villa, etc) fundamentally for ‘overnight stay’ as the Directive says and which we will refer to as “fractional” in this article. But where the client is in addition to the fractional occupation of the unit offered a share or percentage interest in the unit then we could call this “fractional-ownership”.

I think that everyone will know by now that the current Spanish Act 4/2012 expressly recognizes the validity of “contractual” systems subject to non-Spanish law (such as corporate, club-trustee, etc) operating in respect of resorts located in Spain under the provisions of the Rome I Regulation, without prejudice to the obligation at all times to comply with the consumer protection laws of Spain. This same Act provides for the Spanish system of in rem or leasehold rights called aprovechamiento por turno (rotational enjoyment), albeit only as a different option from the personal or contractual systems subject to non-Spanish law.

Section I of this Act refers to all the timeshare rights being marketed in Spain, whether those of a personal or contractual nature which are subject to foreign law or those of the Spanish systems of rotational enjoyment, the reason being that the said Section I is merely an almost literal transposition of the consumer protection rules of Directive 2008/122/EC which mainly refer to pre-contractual information, cooling-off period, withdrawal from contract, etc. And, as I said at the beginning, whatever we want to call it and so that there is no circumvention of law, fractional is, in essence, timeshare, at least as regards occupation by annual periods (whether of one, two or three weeks, six months, etc).

While the 1998 Act was intended to lay down the mandatory use of the rotational enjoyment right as the only system capable of being operated in Spain, Section II of the new Act makes provision for the said Spanish system, albeit updated. This is not merely a system of personal or contractual rights but one based on the so-called “right in rem”, namely a right which is related to ownership of a real property or which is directly linked to ownership of a real property, which is thus encumbered whoever its owner may be. It should stressed that the national law of the place in which the real property is located is of mandatory application where rights in rem or leaseholds are involved. Hence the Rome I Regulation refers only to personal or contractual rights even if they ultimately refer to occupation of a real property located in Spain.

If by “fractional ownership” we understand a product which results from the addition of two rights, the first one being occupation of the unit during a long or fractional period (i.e. one month or longer) every year and the second one a share or percentage interest in the ownership of the unit, the provisions of Spanish law will have to be complied with as follows: (i) As regards the right of occupation during a long period, the contract of sale needs to meet all the requirements envisaged in the Directive, which are implemented by Section I of Act 4/2012 (pre-contractual information, ban on deposits,  cooling-off period, withdrawal, etc), whether the chosen system is that of contractual rights subject to non-Spanish law (i.e. club-trustee system) or the Spanish rotational enjoyment system. In the latter case, the specific rules concerning the formalisation of such Spanish system and the consumer protection rules contained in Section II of the said Act will also need to be met. (ii) However, if an ownership right is also transferred in respect of the unit or a part thereof, the regulations concerning ownership and rights in rem contained in other Spanish laws or rules will also be applicable.

As a first conclusion, therefore, we can say that the occupation-fractional right can be marketed in Spain and so can the ownership right in respect of a real property or part thereof; that is, the subject of the sale is not one only “product”  whereby two rights are granted (occupation and ownership) but two different “products” which are sold at the same time; the simultaneous occurrence of the sales of two different products must not involve an obligation to buy one right in order to be able to buy the other at the same time.

My interpretation of Spanish Law in this case is a risky one (as is almost everything in the field of law), particularly if made on such a general basis, so each specific case will need to be studied in each case in order to assess its validity which, even then, may be arguable in certain aspects.

Where such a statement concerning the joint sale of two different rights refers to the sale of occupation by fractional periods in a club-trustee system (with application of the rules contained in Section I of Act 4/2102 only) and a share of ownership of the unit according to the Spanish laws on ownership and rights in rem relating thereto, the statement seems less controversial. But where the said statement refers to the joint sale of a fractional occupation right in a Spanish rotational enjoyment system plus a right to partial ownership of the unit, it is much more arguable according to the provisions of Section II of the aforesaid Spanish Act referring only (?) to the Spanish system. In fact, the former Spanish right known as multi-ownership, which in practice entailed the sale of an undivided share or fraction of ownership with the “inherent and inseparable” right to occupy the property during a period whose duration was proportional to the relevant “fraction” of ownership (whether one week, one month, two months…), was expressly prohibited by the 1998 Act and continues to be prohibited by the current Act – and it should not be forgotten that Spanish law is of exclusive application to ownership issues – when it specifically lays down that “The right in rem of rotational enjoyment may under no circumstance be related to an undivided share of ownership and it may not be called multiple ownership or any other name containing the word ownership”.

But, will it be possible to transfer two rights jointly – a share of ownership and the right of occupation in a Spanish system of rotational enjoyment – without it constituting a circumvention of the mandatory rules of Spanish Law?

My answer is also affirmative in this case, at least in theory, where the sale of one right is not necessarily related to the other although, as I said before, this is a risky statement which may only be answered for every specific case in order to minimise the risk.

On a final note, two important comments: (i) It is important to take into account the type of property which is partly or fully subject to the sale, i.e. is the unit legally classified as a residential property although temporarily used for tourism purposes or is it legally classified for tourist use exclusively (in which case it may not be used as a place of permanent residence), which would entail the obligation to operate it together with all the other apartments of the resort by one only tourist services company, without prejudice to the possibility that the owners may at some point receive a rent for the assignment to such a company; and (ii) if a share of ownership has not been directly vested in the final purchaser of the fractional product but merely a proportional share in the economic proceeds obtained from the sale of the unit during the process of liquidation of the fractional system subject to non-Spanish law (e.g. upon liquidating the Club) or the fractional-Spanish rotational enjoyment system, such a distribution does not constitute a sale of property but merely a possible compensation for the termination of the said system.

The liquidation will be carried out according to the club-trustee rules in one case or according to the rules of the Spanish system in the other. Section II of Act 4/2012, with regard to the Spanish system of rotational enjoyment, sets forth that the holder of this right shall not be entitled to any compensation whatsoever merely as a result of the termination of this legal system on the date envisaged in its own Constitution, but this does not preclude the possibility of including in the constitution the right to receive such a compensation.

And a final note: These transactions are generally, without prejudice to the international treaties entered into by Spain, subject to taxation in Spain in all cases.