Between January and August, international tourists spent 43,584 million euros, a 7.4% year-on-year increase. United Kingdom was, by a certain margin, the main source of additional expenditure during that period, followed by Germany, Asian countries and United States. The Canaries and Andalucía were the Regions where the highest additional expenditure was generated during those months.

United Kingdom generated 22.9% of the total expenditure and showed a 9.4% year-on-year increase. The canaries, Andalucía and Catalonia absorbed the increase, albeit the Balearics attracted the most British expenditure (32%). The average expenditures of this market increased this month.

Germany issued 14.1% of the total expenditure, marking an increase of 11.4%. Balearics received 51%. With the exception of Madrid, all Autonomous Regions benefited from the increased expenditure, particularly the Canaries and Valencia.

France issued a similar volume of expenditure as Germany, with the difference that its average expenditures decreased more noticeably. The total French expenditure grew by 3% thanks to a rise in the number of arrivals, which benefited the Autonomous Region of Valencia the most.

Italy’s expenditure grew by 6.7% and this had an effect on Catalonia, Andalucía and the Madrid Region, while Italian expenditure decreased in the rest of the main Regions.

As for the remaining markets, the growth of the Russian Market’s total expenditure stands out this month despite a reduction in arrivals, which means that their average expenditure per holiday and per day increased. Also to be noted is the expansion of the Asian Markets and United States’ expenditure thanks to an increase in arrivals. 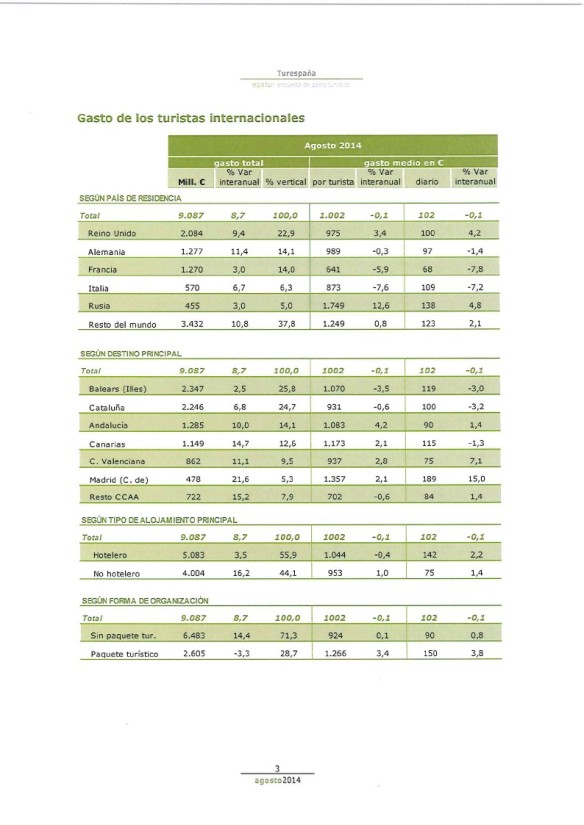 TYPE OF ACCOMMODATION, ORGANISATION AND REASON FOR TRAVELLING

Expenditure by tourists who chose non-hotel accommodation rose to a greater extent (16.2%) than that of hotel establishment guests (3.5%).

93% of the total expenditure came from tourists who visited Spain for leisure, an increase of 9.8%.