Many a draft came to light in the 1990s aiming to enact a law which would specifically regulate what was initially called timeshare (tiempo compartido in Spanish), and many seminars, conferences, etc. were held to make proposals, discuss what its scope should be and, especially, establish a reliable legal framework for both the consumers and the traders in the Sector.

Eventually, as has often been the case, the new Act was rushed as a result of the need to have a new law given the quantitative and qualitative importance of this phenomenon and, to no lesser extent, the media impact of the problems which had arisen between consumers and traders and the so-called abusive practices in its commercialisation.- But the fact is that, after many years of drafts, bills, etc., the urgent need or, rather, obligation, to enact a specific law for this economic activity arose, as has happened on many other occasions, from the adoption by the European Parliament and the Council of Directive 94/47/EC of 26 October. And, also as many times before, the Act which incorporated into the Spanish legal system the provisions of the Directive was enacted by the Kingdom of Spain well past the deadline thereby established; so late, in fact, that everything had to be done rather hastily.

Timeshare became popular in Spain under the name “multi-ownership”, in some cases meaning strict ownership of a certain share of a property but, ncreasingly so among Spaniards, as a term equivalent to the timeshare name, as a literal translation of ‘timeshare’

When the pressing need to implement the aforementioned Directive arose, the General Directorate of Public Registries and Notaries was tasked with drafting the Bill. It seemed quite surprising that the proposed regulation of this predominantly touristic phenomenon, which today is called “marketing of accommodation in tourism establishments” even in the relevant legal texts, should start and be developed by the management body of Notaries and Registrars of Property. That is, its structure or legal regulation had become a matter of ownership, or of rights directly related to ownership, despite the fact that this word was banned from the marketing process.

The drafters of the Bill acknowledged at all times that this was a (merely) touristic activity but, when it came down to it, the “touristic element” of the new regulation was the least important thing.

Directive 94/47/EC contained a clear mandate to the legislators of the EC member states to incorporate certain “consumer protection” rules, the fundamental purpose of which was to prevent the bad practices which doubtless existed. To do so, particular focus was put on the need to provide the consumer with truthful, detailed information, to establish a ten-day period of free withdrawal from the contract of acquisition of the right –which in certain cases could be extended for another three months- , to prohibit “advance payments” on account of the price during the withdrawal and termination period, to ensure that annual service fees may not be determined arbitrarily by either party, etc. But the Directive never required –quite simply because it did not fall within its competence– a civil or mercantile regulation of this economic activity. This was a faculty and discretion to be exercised by each State at its convenience.

And what the Spanish Administration did, through the General Directorate of Public Registries and Notaries, was consistent with the Body which had been tasked with this Bill: It chose to implement a full regulation of the timeshare phenomenon which included the mandatory rules laid down by the Directive but also a substantive regulation of the legal systems and contracts of “timeshare” and/or “multi-ownership”, which would thereby start to be known, exclusively, as aprovechamiento por turno de bienes inmuebles de uso turístico (rotational enjoyment of real property for tourist use).

The drafters of the Bill, without a doubt, in keeping with their background and convinced that it was the best option, chose to prohibit the future use of any other legal system for this kind of touristic rights and decided to establish an only, mandatory formula, outside of which there was no other option.

Only very restrictively –and, as we now know given the interpretation of the Supreme Court, also insufficiently and confusingly– were the legal systems in existence before this Act “acknowledged” and allowed to maintain their pre-existing real or personal nature, albeit a formal requirement was imposed on them to give public status to the system without transforming its own legal nature by causing it to be registered at the Land Registry. Other than that, there was nothing but restrictions and safeguard clauses to prevent any leak through the wall of the dam which had been designed to “stem the tide”.

And based on what economic studies, what studies in the reality of this phenomenon and its level of compliance, what studies on a tourism level, what comparative report on these systems and what the consequences would be… did the drafters of the bill reach that conclusion?

The Spanish Association of Timeshare Traders (A.N.E.T.C.), currently the Spanish Chapter of the European Trade Organisation RDO, conveyed to the General Directorate of Public Registries and Notaries the opinion of this trading sector on the matter, which included the following views:

Not much success was achieved other than an alternative formula which was almost identical to the former, albeit configured as a leasehold right of rotational enjoyment which had to be formally established by public deed and whose registration with the Land Registry was mandatory so that determinable units of the same type and determinable occupation periods within the same season could exist in one only resort.

A prohibition was thus established on flexible systems which related to various resorts in Spain or in several countries, or the already incipient “points systems”.

The A.N.E.T.C. also argued that the intended prohibition of any other system of personal or binding rights (article 1.7 of the Spanish Timeshare Act 42/1998) was contrary to a rule of Spanish Law which prevailed over this new rule, i.e. the 1980 Rome Convention, and, despite this qualification being known, the matter was left in limbo. Hence the title of this article.

To avoid the confusion which the former Timeshare Act 42/1998 had created in this regard, the new Spanish Timeshare Act 42/2012 made specific mention of timeshare (aprovechamiento por turno) contracts in accordance with the Rome I Regulation, which had replaced the former EU rule known as the 1980 Rome Convention.

Not being in agreement with the Bill, A.N.E.T.C. made a formal request to the Council of State to ask that its observations be taken on board (which, on the other hand, were the only observations submitted to it as no other organisation made a similar request). 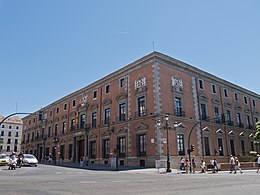 The traditonal & central building of the Spanish State Council in Madrid

Without a doubt, such observations of this trade organisation were partly embraced by the Council of State in its report, some of whose points we would like to highlight –the full text can be found in Spanish on the following link:

One of the considerations of the Council of State in its Report refers to the “Conclusions of the Special Commission for the determination, study and proposed solution to the problems posed by the application of the Legal and Economic System, in which I was invited as «interlocutor»

I  believe that the Report of the Council of State shows the shortcomings of the process which led to the enactment of the Timeshare Act 42/1998, one of which is, without a doubt, a deficient regulation of legal systems of personal rights which can doubtless be used for the configuration of “timeshare” or “rotational enjoyment” rights.

It would have sufficed to be aware of what the reality of timeshare was back then based not on personal opinions but on a deep, serious study of its circumstances.

All these loopholes determine that this opinion – the Report says – must be given without knowing a very important group of circumstances of particular relevance. Thus, with proper account being taken of such a reservation and considering the eminently touristic and vacational spirit of this sector and its very relevant projection to non-residents, the Council of State feels that the regulation “ex novo” of a special system of rotational enjoyment of real property should include the dual possibility of following legal-in rem or legal-personal formulas.

This article only intends to express the undersigned’s opinion.